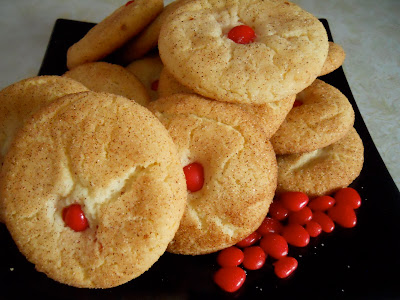 I made 135 of these cookies last week.
I know I usually exaggerate, but this is for real. 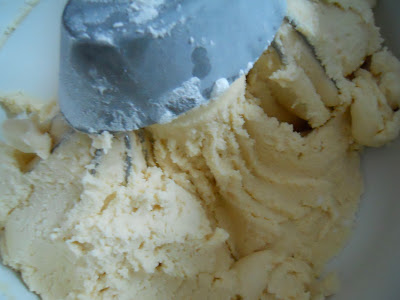 One hundred and thirty five cookies.
Wow. Sometimes I amaze myself. 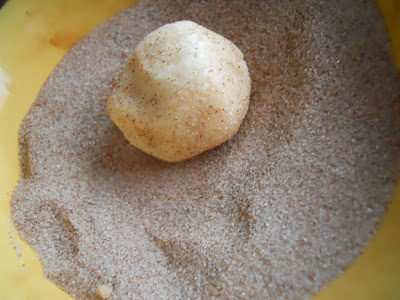 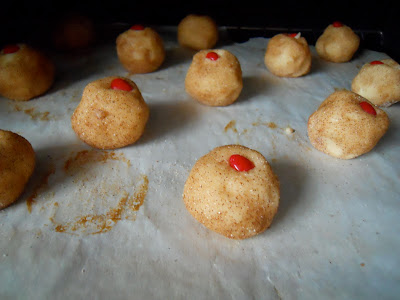 I've heard a lot of good and bad things about cookie exchanges but I'm happy to report the one I attended (thanks to Crystal for hosting it) was a success!
There was an excellent variety of baked goods being exchanged and they were all delicious:
Triple Chocolate Cookies
Butter Tart Bars
Chocolate Caramel Crunch Cookies
Peanut Butter Balls
Chocolate Chunk Brownie Buttons
Gingersnaps
Chocolate Pecan Caramel Thumbprints 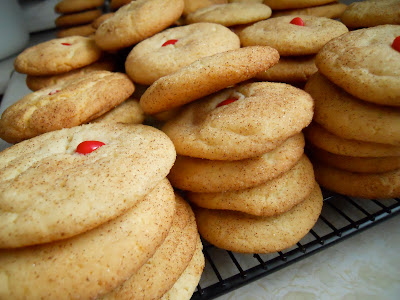 Not bad, eh? (My canadian accent really comes out at Christmas time)
Best of all, I can justify eating more baking because, you know, I wouldn't want to offend anyone by not eating their goodies ; )
Cinnadoodles
Makes: 4 dozen cookies
Adapted from here. Inspired from here.
2 tsp cream of tartar
2 ¾ cups flour
½ tsp salt
1 tsp baking soda
1 ½ cups sugar
1 cup butter ( I used ½cup butter and ½ cup margarine)
2 eggs
1 cup cinnamon hearts or cinnamon chips plus more for on top of each cookie
¼ cup granulated sugar
1 tsp ground cinnamon
Directions:
*Note: The cinnamon hearts (or chips) can either be mixed in right away with the dry ingredients or a few can be stuffed into the middle of each cookie dough ball. I used the second method because I didn't like the look of the cinnamon candies throughout the batter. When they were cooked they sort of oozed and melted all around the cookie. By stuffing them in the middle the cookie had a cinnamon centre. Regardless of my choice, either method will work fine.
1. Mix together the cream of tartar, flour, salt, baking soda and cinnamon hearts (see note above). Set aside.
2. Cream together the butter and sugar until light and fluffy, about 2 minutes. Add eggs and continue beating until well blended.
3. Add dry mix to the creamed mixture and blend until thoroughly incorporated.
4. In a separate bowl, mix together the ¼ cup sugar and cinnamon.
5. Form into balls ( I weighed mine out into 25grams) and roll in cinnamon sugar mixture. Press 1 cinnamon chip or candy into the top of the ball for decoration.
6. Place cookies 2'' (they spread a lot) apart on an ungreased cookie sheet and bake at 350°F for 11 minutes.
Posted by Jessica at 7:00 AM