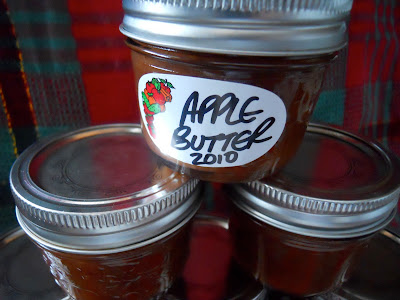 Not too long ago, I made some spiced vanilla pear butter.
I had originally intended on subbing apples into the same recipe to make apple butter but that thought quickly bored me...... so I went a different way :)
The cinnamon, cloves and allspice in this recipe are right up my alley and a nice change from the pear butter's cardamon and vanilla.
I reduced the vinegar down to about ¼ cup and I wish I hadn't. Even though I also reduced the sugar the butter is overly sweet and I think the proper amount of vinegar would've balanced out the sweetness.
Just an observation. 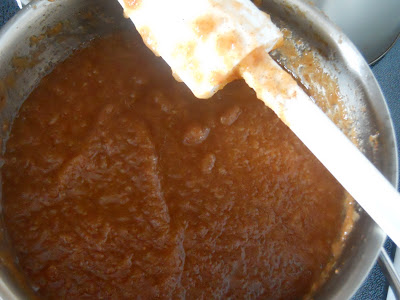 Nonetheless, I have a bunch of this stuff now (12 x 4oz jars!) and it's still pretty good.
I've been stirring it into plain yogurt, quinoa and oatmeal for breakfast and giving it away in Christmas packages.
Apples are still in abundance around here and this would make a great (and cheap) homemade gift.
Just in case you were wondering ;)
Apple Butter
Makes: about 3 pint jars
Source: Simply Recipes
4 pounds of apples (use good cooking apples such as Granny Smith or Pink Lady)
1 cup apple cider vinegar
2 cups water
sugar (about 4 cups)
salt
2 tsps cinnamon
½ tsp allspice
½ tsp cloves
juice and zest of 1 lemon
Directions:
1. Cut the apples into quarters, without peeling or coring them (much of the pectin is in the cores and flavor in the peels), cut out damaged parts.
2. Put them into large pot, add the vinegar and water, cover, bring to a boil, reduce heat to simmer, cook until apples are soft, about 20 minutes. Remove from heat.
3. Ladle apple mixture into a chinois sieve (or foodmill) and using a pestle force pulp from the chinois into a large bowl below. Measure resulting puree. Add 1/2 cup of sugar for each cup of apple pulp. Stir to dissolve sugar. Add a dash of salt, and the cinnamon, ground cloves, allspice, lemon rind and juice. Taste and adjust seasonings if necessary.
4. Cook uncovered in a large, wide, thick-bottomed pot on medium low heat, stirring constantly to prevent burning. Scrape the bottom of the pot while you stir to make sure a crust is not forming at the bottom. Cook until thick and smooth (about 1 to 2 hours). A small bit spooned onto a chilled (in the freezer) plate will be thick, not runny. You can also cook the purée on low heat, stirring only occasionally, but this will take much longer as stirring encourages evaporation. (Note the wider the pan the better, as there is more surface for evaporation.)

5. There are several ways to sterilize your jars for canning. You can run them through a short cycle on your dishwasher. You can place them in a large pot (12 quart) of water on top of a steaming rack (so they don't touch the bottom of the pan), and bring the water to a boil for 10 minutes. Or you can rinse out the jars, dry them, and place them, without lids, in a 200°F oven for 10 minutes.

6. Pour into hot, sterilized jars and seal. If you plan to store the apple butter un-refrigerated, make sure to follow proper canning procedures. Before applying the lids, sterilize the lids by placing them in a bowl and pouring boiling water over them. Wipe the rims of the jars clean before applying the lids. I use a hot water bath for 10 minutes to ensure a good seal.

As an alternative to stove cooking the puree you can cook uncovered in a microwave, on medium heat to simmer, for around 30 minutes.
Posted by Jessica at 7:00 AM